Leesfield Scolaro has filed a lawsuit on behalf of a vacationer for her claims against Hawk’s Cay Resort for the negligent transmission of Legionnaires’ disease which caused significant injury and illness.  Marcia Blanar was a guest at Hawk’s Cay Resort in Duck Key, Florida, from June 30, 2021 until July 6, 2021, where she contracted the disease.

An investigation and environmental assessment of the property by the Florida Department of Health revealed a positive growth result for Legionella bacteria in the fountain near the main pool of the Hawk’s Cay Resort.  Legionnaires’ disease is a serious form of pneumonia that is spread from aerosolized water that contains Legionella bacteria.  According to the Florida Department of Health at least two confirmed cases of Legionnaires’ disease were linked to individuals who had traveled to Hawks Cay during their exposure period.

The fountain near the main pool area where Legionella was positively identified by the Florida Department of Health is located at a main junction of the resort.  Multiple pool chairs flank the decorative circular fountain, and the exterior of the fountain is also utilized as a seat for hotel guest.  The area of the fountain is also immediately adjacent to a bar and several food service facilities.  Mrs. Blanar was exposed to the Legionella while sitting next to the fountain enjoying a beverage.  Hawks Cay Resort is a massive complex, advertised as having 427 villas and hotel rooms, six restaurants, a saltwater lagoon, five swimming pools, a full-service spa, as well as onsite watersports, fishing charters and Dolphin Connection facility on the premises.

END_OF_DOCUMENT_TOKEN_TO_BE_REPLACED 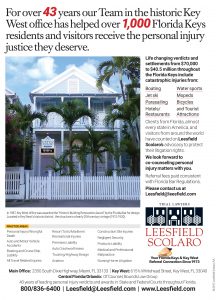 2017 was, again, a record year for verdicts, settlements and community contributions for Leesfield Scolaro. Clients from around the country and local residents of Key West and the Florida Keys selected our Firm in over 25 separate matters, including injuries from watersports, motor vehicle injuries, bicycles, moped disasters, hotels and resort injuries and many unimaginable events to visitors and residents alike.

When a private transportation bus crushed the vehicle of our clients visiting from Orange, Virginia, the result was a mediated settlement in excess of $1 million. The case was resolved in less than a year with our clients getting the financial assistance to put their lives together again.

A brief look at our Firm’s noteworthy results over the year would include:

END_OF_DOCUMENT_TOKEN_TO_BE_REPLACED 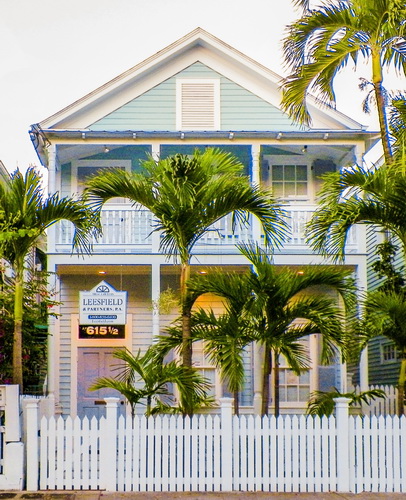 Ira Leesfield‘s career began in Key West with a $2 million medical negligence recovery against a Florida Keys hospital, followed by a $2.1 verdict for a motor vehicle/moped collision (Kemp v. AMR). In addition to settlements for medical malpractice, negligent security, water jet ski and boating safety, moped, bicycle and street safety, Leesfield Scolaro holds record verdicts for settlements in Key West and throughout the Florida Keys. These results include the crash of a tourist stunt plane in Marathon, resulting in the death of a young mother with two children.

Following catastrophic injuries to bicycle and moped operators, the firm has aggressively pushed the “Share the Road” campaign, as well as supporting Mothers Against Drunk Drivers (MADD) and boating safety.